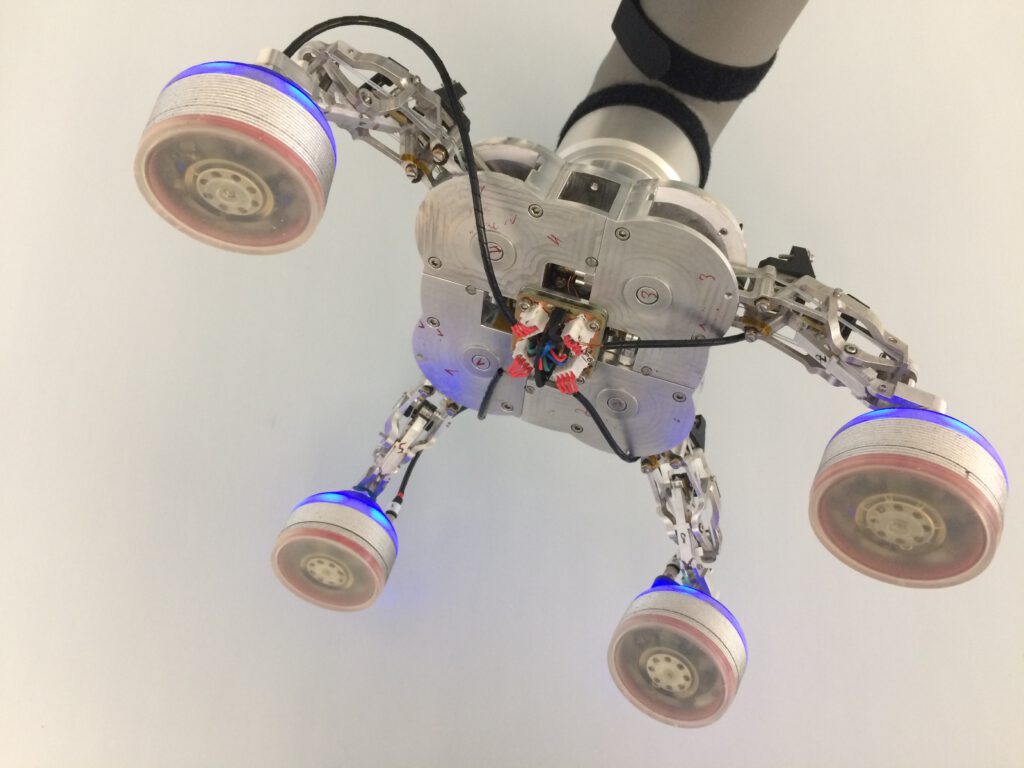 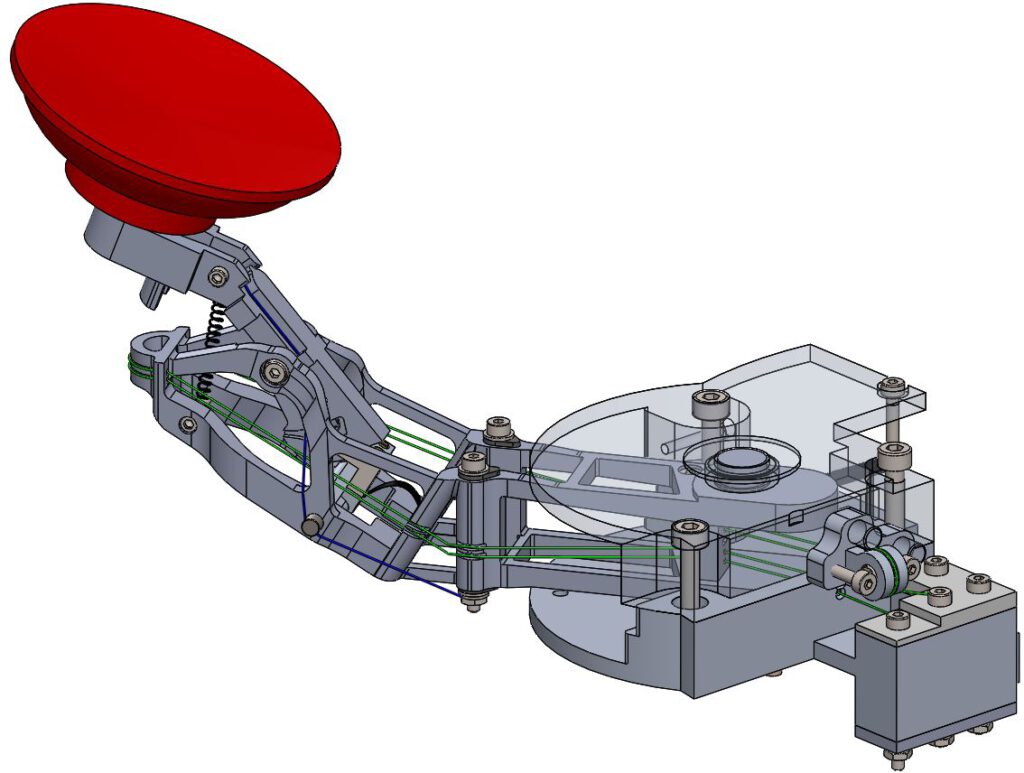 Thermal shape memory alloy (SMA)actuators are known for their superior energy density compared to other actuation principles, allowing the construction of lightweight and compact systems. Furthermore, SMA actuators can be used as sensors, as their electrical resistance changes during activation. Using this multifunctionality, this work aims at presenting the development, fabrication and validation of an SMA driven robotic end-effector. The end-effector prototypeis designed in a modular concept andconsists of four independent arms with two degrees of freedom (DOF). Each arm can rotate in-plane and also tilt out-of-plane to allow gripping of various workpiece geometries. Both DOF actuator components consist of an SMA wire working against a tensionspring.The tilting joint hasan additional mechanism that createstwo energy-free restpositionsto improve energy-efficiency. The end-effector is designed to carry a maximum load of 10 kg. In a test bench for the validation of the SMA driven end-effector joints, hall sensors are used to measurethe gripping arm displacement. In addition,the resistance of the SMA wires is monitored during activation.The dynamic system performance is analyzed using different activation current levels. Finally, a PIcontrol with hall sensor feedback is implemented to position the first DOF at arbitraryangleswithin its 90 ° rotation radius.

Development and Control of a 2-DOF Reconfigurable SMA End-effector

In this paper, the next generation of an SMA end-effector prototype is presented. The end-effector design is based on a modular concept. Each module has two degrees of freedom (DOFs) with independent SMA-bias-spring configurations. The firstDOF, denoted as arm, can be positioned in plane within a 90° rotation radius. The secondDOF, denoted as finger, can be rotated out of plane within a 30° rotation radius for adapting to non-planar workpiece geometries. In contrast to the firstDOF, the second DOF additionally uses a pull-and-release principle familiar from ball-point pens, to hold three discrete energy-free positions. A microcontroller-based PCB is designed and manufactured to control all eight SMA-wires independently by separate PWM-voltage-controlled current sources. This circuit is also designed for positioncontrol by using the “self-sensing” ability of the SMA-wires. The design of theactuator construction is presented along with a prototype.The prototype’s functionality including the positioning of the arms is evaluated and validated.

In this paper ashape memory alloy (SMA)based handling system is presented. The focus of this paper is the whole gripping system where several SMA based prototypes are combined in one gripping unit. The system consists of a reconfigurable SMA end-effector prototype and four bi-stable SMA actuated vacuum suction cupsthat are mounted on the arms of the end-effectorand SMA brakes in every end-effector arm.With the help of these four independent adjustable gripping arms the end-effector is able to adapt to either a flat shaped workpiece or around shaped, spherical workpiece. Integrated mechanisms allow an energy free position holding of the end-effector components and only during adapting process electric current is needed. With this prototypeformer material handling systems could be replaced, in particular in times of industry 4.0 where time and energy management assumehighimportance.The gripping unit that is controlled with an external microcontroller and it can be mounted on a robot for diverse handling purposes.

Development of a Reconfigurable Endeffector Prototype

Material handling is a crucial part of manufacturing and assembly in industry. In state-of-the-art handling systems, robots use various end-effectors to grip and transport different shapes of workpieces. The exchange process of fitted end-effectors to appropriate workpieces, often requires to interrupt the manufacturing process. From the prospective of economic efficiency, there is an inherent benefit creating a reconfigurable end-effector thatis able to adjust automatically to different workpiece geometries. In this work a novel end-effector prototype based on shape memory alloys (SMA’s) is developed and experimentally validated. The end-effector prototype hasfour arms with two SMA driven reconfigurable degrees of freedom (DOF’s) to allow gripping of different workpiece shapes and geometries. Each arm is rotatable by 90 degrees(1. DOF) and uses a counterweight to relieve the SMA wire. The tip of the arm is driven by a separate SMA in a 20degreerange and it has a special locking mechanism to hold different positions without any flowing current. The designs of the actuator constructions are presented and a prototype is produced via rapid-prototyping. Future work will include the characterization of the second DOF and controlling the positions of both DOF’s by using a PID controller based on the SMA self-sensing ability.

In this paper, a shape memory alloy (SMA) based handling system is presented. The gripping system consists of two different actuator systemsbased on SMA wires. The firstoneis a reconfigurable end-effectorwith four independent gripping arms. The second SMA actuator system is abi-stable SMA actuated vacuum suction cup, of which oneismounted on each of the four arms of the end-effector. Whilethefour independentlyadjustable gripping armsofthe end-effector allow for an adaption todifferent workpiece geometries likea flat shaped workpiece or a round shaped, spherical workpiece, integrated SMAdriven brake mechanisms enable an energy free position holding of the end-effector components.This means that an electric current is only required when the end-effector arms need to be rearranged. This results in a versatile, adaptive and energy-efficient handling systemthat can replace mostly pneumatically driven state-of-the-art systems in production and assembly industry.Nomanual adjustment of the gripping systemor even exchangingis needed, if an assembly line switches between products with different work piece geometries as a result.The gripping unit is controlled usingan external microcontroller and can be mounted on a robot for diverse handling purposes.